I love it when a plan comes together but hate it when I can’t think of a catchy title for a post. Oh well. In my last post regarding my new laptop, things have been progressing.

My last statement in that post said something about how there is something to be said about having a Mac “just work out of the box” but I’ve seen lots of people post saying that part of the fun of Linux, is trying to get things to work. It can be downright frustrating, of course, but when it works, it works well.

My laptop is a Toshiba A215 (which I just added another 2GB of ram). It’s a great laptop. Vista works well with it. I can’t complain about that, but I’ve been wanting to run Linux full time on it. One of the quirks of this laptop is that the wireless device shows up as an usb device, which is something very strange:

This wireless device is indeed a Realtek RTL8187B. Some people have gotten it to work and others have just given up on it. Those of the people who got it to work have hardcoded the wifi settings in a config file. I wanted to have the nifty wifi-selector that “NetworkManager” provides. I don’t want to hardcode anything (like the Mac). I searched and searched and tried everything I could find to do. I found a lot of really great resources but nothing worked. This was one of the best sites:

I mean it, I was pulling my hair out. It shouldn’t be this hard. I began to be disappointed with my otherwise ideal laptop. I started to read about other wireless USB devices that work with linux. I came up with a plan. I checked out Circuit City’s, Best Buy’s, and Office Depot’s websites to see what they had on sale AND what wireless USB devices worked under linux.

One page I had found (and you know, I can’t find it now!), had a list of pretty much all the wireless USB devices and if they had kernel support or if drivers existed. But it also had a column that reported if it “worked out of the box” or not. Each of the stores I mentioned above had a Linksys on sale, AND it was reported to “work out of the box!” I was excited but also very nervous whether or not it would work. I saw a few posts around where people where having problems with. I picked up the Linksys® WUSB54GC Wireless-G USB 2.0 Network Adapter for $50 after “instant savings.” 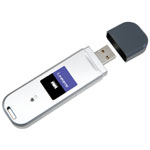 So when the moment of truth came, I plugged in the WUSB54GC into one of my USB ports and say the following message:

It worked! I didn’t have to do anything! Sure enough, NetworkManager presented me with both my wireless networks (and my neighbors’). I couldn’t believe it. It works great. It works good on the suspend and resume functions of my laptop.

Sure, I really wish that the onboard wifi worked under Linux, but from I’ve read, they’ve only just merged the driver support into the very latest kernel sources so I suspect that support will continue to get better. But for now, I’m very happy with this device.

Now, the only lingering item is sound. Fedora 8 went to using Pulse Audio for the default sound server. Sure looks good on paper, but it doesn’t work and I’m not the only one; there are several threads over at the Fedora Forums talking about it. But FC8 is still bleeding edge. It will work sooner than later, I’m sure.