Anyways,  I did get it fixed.  I had the broken LCD replaced by a local shop.  Apparently, most higher end cell phones can be repair.  So I had gotten it back right after Cupcake came out.  After some prodding I decided to go ahead and “root” my G1 and install some custom ROM’s.

First off, it was really easy.  Second, you can have your apps on your SD card and just go nuts.  I have a 2GB SD card and have made a 600MB partition (using ext3) for apps.

If you are interesting in rooting your G1, here’s where you can get started:

If you follow the first three sections, you are on your way to get your custom ROM, (be sure to install the radio, too).  I couldn’t partition my SD card as described so I took the lusers way out and used a Partitioning program to make the following partitions on my SD card:

If you were able to get through the directions, you are probably ready to install your custom ROM.   There are several to choose from, each with their loyal of armies.  The most popular seem to be:

There are a couple of others but I don’t have any experience with them.  At first, I used JesusFreke’s ROM, but now I am using Cyanogen’s ROM.

What I think is cool, is that these ROM’s unlock the true potential of the Android OS.  No one is trying to get something for free to crack the apps.  Rather, they are all adding functionality and features that were not in the original release.  For example, these guys figured out how to get the phone to use linux swap, and then they figured out how to use Linux kernel modules for even better performance.

I’ve posted before about my frustration with Real Estate spam, (I have since marked my license ‘inactive’ since I can’t  dedicate time and money to it), I have been fighting a personal battle with “Listing Eflyer” or some combination of the above.  Essentially, I am blocking on my mail server, several versions of this:

These guys totally sucks.  They prey on R.E. agents trying to drum up business, but in reality, these agents are paying for the privilege for ending up in someone’s spam folder.

I hate this person.

Notice the amount of Spam this guy generates. 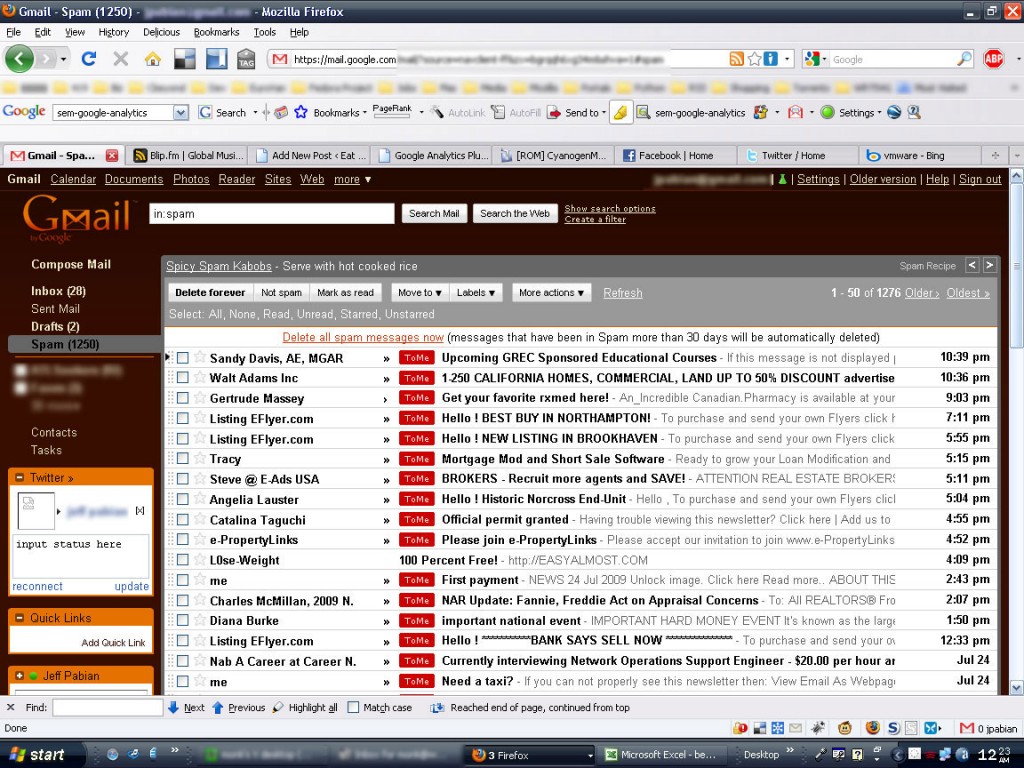 He sucks, and my heart goes out to the hungry agents out there that he’s preying on.  If you are a Real Estate professional, check out my other posts on responsible email marketing.  Don’t let this chump take your money so you end up in someone’s spam folder.