We just got back from a wonderful time down at Disney World.  They sure know how to do it right.  Not only do they have excellent customer service, they go all out to make sure their customers have a great time.

This was the first time we actually spent time on their property.  That’s how you got to do it.  I drove our van once over the entire week for a beer run. Everything else has been taken care of.

Now, I have a tattoo.  I got it when I was 18. I can hide it easily.  At Disney world, tattoos are the new goatee.  You ain’t cool unless you have a tattoo. At Disney World, one will get to see a lot of tattoos.  I saw plenty of arm sleeves, leg tattoos, and heck, I even thought about getting another one on my leg, (in college I had picked out the most awesome Japanese Shadow puppet for my calf), but there were zero neck tattoos.  That is, until we returned to Georgia. It still boggles my mind why anyone would get a neck tattoo.

If you know anything about me, then you will know I have a thing for shoes. Specifically, wearing the proper shoes for the specific occasion; don’t wear running shoes for playing tennis or soccer, don’t run in cross trainers, etc. For the most part, I was pleasantly surprised to see that most people did wear proper shoes for the Bataan Death March that is walking for 13 hours on pavement around the Magic Kingdom.  There were a few people wearing Crocs and flip-flops, but there was one lady wearing super-sexy high heeled shows, (let me state that by saying “super-sexy” I didn’t find her super sexy, but something led me to believe she thought she was super sexy), who was pushing a baby stroller.

Honestly, I’m not sure if that is vanity or just plain ol’ poor planning but if she walked just half of the distance we walked, she’s going to need surgery by the time she’s 40.

The place we stayed had an awesome pool. It was awesome for many reasons, but the best reason, I think, is that we met a ton of cool people at the pool. Heck, we met a ton of cool people everywhere but at the pool we had the time to sit and talk and get to know people. We met their kids, learned about their lives, etc. It was awesome. I wish I had the foresight to bring my calling cards to hand out so we could keep in touch with these folks.

At the parks, we ran into neighbors from our subdivision, kids from school, and our son heard someone in the crowd say my and my wife’s name. So there is no telling who else we (could have) bumped into. Update: Courtney Cox and David Arquette were there the same time we were.

We ate like pigs.  I kept calling myself, “7000 Calorie Man!” since everywhere we ate, it was tons o’ food.  But we certainly walked it off.  Every place we ate at was better than the last place. No one in our family was particularly taken by the Disney Characters, but our kids, (surprisingly), chowed down on the salmon at the buffets.

One night, we hit the German Beer Garden in Epcot. It was really fun and I overate big time. It was more about the experience than it was about the food, but it still was pretty good. I could not get my daughter to do the Chicken Dance with me.

We take it for granted. We’re healthy, we can get around pretty easy. We aren’t confined to a wheel chair or walker. This time, there were 100’s of people in those motorized scooters or chairs. It was hard to tell if they were handicapped or just fat but they were everywhere. 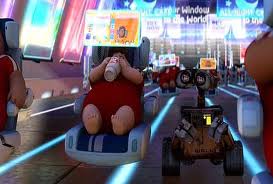 At the time, I was thinking I have had enough Disney to last until the kids are teenagers. But looking back, it was a great vacation and a lot of fun. I’d consider going back before too long. If you have questions, suggestions, or comments, I’d love to hear them!