Tonight, my wife is out with her best friends and I am alone… after getting the kids to bed. I don’t know why, but when she is gone, I tend to catch up on some of the techie stuff I keep meaning to do.

For example, I spent a fair amount of time trying to find ways to optimize the performance of my blog and research themes and plugins for wordpress. Tomorrow, I plan to yank out an extra sound card from our PC since it’s making like difficult for my wife since the USB headset we have just doesn’t… sorry, didn’t mean to rant here.

Anyways, I usually take the kids to the closest Fry’s for a look-a-round but I am not sure if that’s in the cards for this weekend since we have a lot of other stuff to do. Starting with this post, I’m going to “tag” it so in addition to the categories, the tags will help you find related posts faster.

Later, I might post about what I found to be the most popular WordPress plugins. I found some cool ones that seem to make life just a little easier and I found a few that everyone seems to be using.

Have a good weekend!

I was able to upgrade some of the original PC’s componets with junk I had laying around. I got a motherboard/cpu in the case, (if you were following along, the motherboard I was using had a bad secondary IDE port), so I am re-installing Ubuntu 6.10 on it. After that’s done, I’ll upgrade it to the latest, (I’m too lazy to download and burn yet another ISO), and I seem to remember reading that MythTV is now a standard package with Ubuntu 7.04.

So, it’s installing now, then the updates and the application install. It will be a weekend project.

My wife’s best friend is coming in into town this weekend so I’ll have plenty of time to jam on this thing and play around with it. I also need to remove a sound card from my desktop. My desktop has on board audio, (pretty nice audio), and I installed Turtle Beach Santa Cruz card I bought for my last PC. I love that card! When I bought it, it was one of the more advanced pieces of hardware I had bought. But, I also use a USB headset and with three sound devices, WinXP sometimes gets confused and it upsets my wife.

Since it will be and just the kids, I am planning on taking them fishing in our lake. We’ve gotten pretty good at catching sunfish and my son got up enough courage to touch a nightcrawler. We’ll go see my Mom, go fishing, and maybe a Cinco De Mayo block party. Before we go, I’ll have to get some provisions.

I also received my 4GB SD card I got from last week’s Woot-off. I had to go out and buy a USB2.0 Card reader since I didn’t have any devices that use SD cards that could format the entire 4GB. Microcenter had a sale on a USB2.0 reader for $12 so I picked it up this afternoon; it works great. So, I shoud have more Mio stuff in the upcoming week.

Okay,  I admit it, I am taking the low road with this one, but I keep chuckling to myself and think it’s funny…

And with all the talk recently of lolcats, I thought I’d keep with a theme.

So, either you know about ceiling cat, or you don’t.  If you do then maybe you might need a reminder every once in a while that he’s watching.  We were screwing around with our Treo’s 650’s today and I said I thought it would be funny to have the ceiling cat as a background on my phone, so you know… he’d be there watching…

So, therefore, my gift back to the Internet is a “Ceiling Cat Treo 650 Wallpaper.”  Yup, that’s right.  Apparently, if you just use an image that’s 320px x 320px, the Treo will truncate it, so the border on this image compensates for the cut-off. 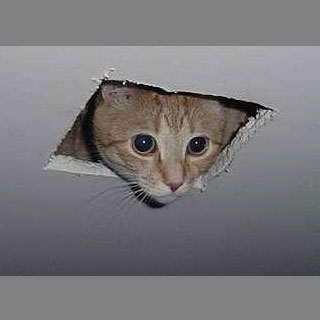 I was going to include my usual list of links, but I think ceiling cat is simply something you have to look for on your own.

I’ve been pretty busy lately.  I’ll have more updates tech updates coming up when I have more time.